Crazy in love 🛹🖤💥
No crisis in this midlife. Today I followed through with threats that I was gonna be *that mamma* at the skate park. Cruising down the Calder on the giddy post-acquisition ride home (in car that is), I workshopped names for a skate crew. It will be a loosely-exclusive crew which I have decided won't be limited to mammas (there goes 'Bored Mamma Crew' as a name). The crew has one member and is currently recruiting (no money or formality involved aside from secret handshakes and optional bring along snacks to share). Let me know if you are local, interested and meet all the following criteria: 1. Female identifying 2. Old enough to want to hang with those old enough to know better but not caring anyway 3. Have or will get yourself a board 4. Into like, hanging out at the skate park and having a gnarly time I'm gonna need back up for when my boy is old enough to get embarrassed by me. So...those names I workshopped? The most likely contender is Maine Skater (largely cause it is location specific and can be shortened to Ms.) with others including BMW (Board Moving Women), She's Over Bored (SOB) and GOD (Gnarly On Deck). Kinda kidding but not with the latter haha. Open to name suggestions in the comments. #castlemaine #castlemainelife #safetyfirst #woohoo #smellsliketeenspirit #nosuchthingasbored #skateboardofdirectors #fullysick #buthealthy #lookingforwardtotshirtdesign
Story inspired by vline's 'happy holidays' video (screenshot shown here). Swipe through to read this #vlinevignette here or head to link in bio to read on blog. #amwriting #thiswasafunone #thenightbeforechristmas #festivus
Sometimes my journey does not end where the v/line terminates. Sometimes I brave the metropolitan train like an urban dweller. I gaze longer than is polite, eavesdrop shamelessly, and sometimes, concoct stories that start at a pause between overheard sentences or give voice to silent but loaded expressions that depart the train with their bearer before my theories have been tested. To read this #metrominutia edition of #vlinevignette, follow the link in bio.

I’ve been busy these holidays, navigating my way through Kingston, with Bob Marley’s music and a patchy awareness of the Rastafari movement being the only prior knowledge I had of the island known to locals as Jamrock.

What better way to spend down time than to get lost in a great book? Marlon James’ A Brief History of Seven Killings is a fictional account of the attempted assassination of Bob Marley in 1976, with a cast of complex characters (CIA agents, gang members, politicians, journalists, children robbed of childhood in the ghetto, and of course, the Singer) that create a rich portrayal of the cultural and geopolitical climate leading up to and in the years following that fateful day in Kingston, which fortunately didn’t lead to Marley’s demise.

I’ve had to put the book down a few times, not because it wasn’t riveting, but because of the curiosity it piqued about so many historical and political events I was not aware of and suddenly had an urge to know about, such as the Bay of Pigs Invasion of Cuba. And herein lie the leadership lessons.

Most people who’ve worked in a team of more than one are well versed, at least in theory, in what makes a great leader and successful team. Looking at the lessons learnt by the CIA from their failed attempt to destabilise Cuba and overthrow Castro in the 1961 invasion that is known as Bay of Pigs, the answers are screaming out. There were a myriad of reasons for the invasion’s failure which were analysed by the CIA but remained classified until 1996. The one thing they seemed to get right were the nuggets in the post-invasion review which provide valuable lessons for leaders and team members in any work environment and on any project. I have countered (counter-intelligenced?) these reasons for failure with my Declassified Caches of Intelligence for a Successful Team. 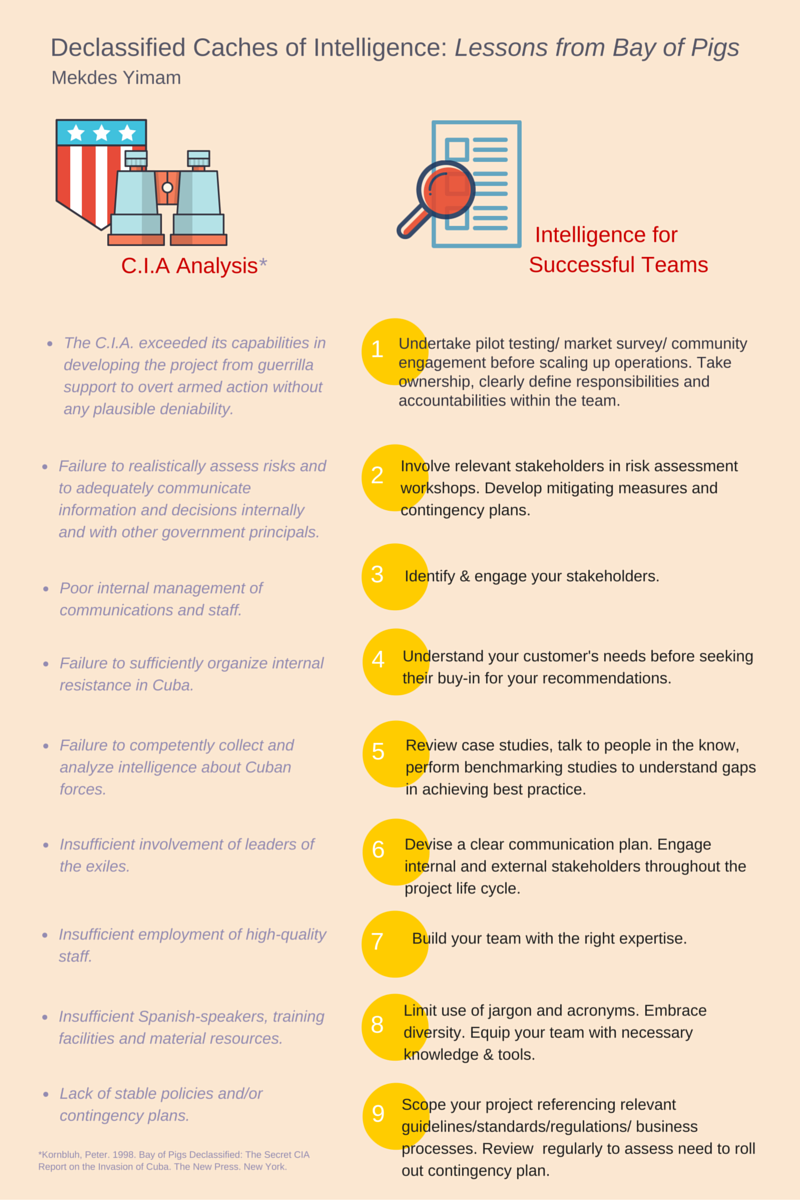 Interestingly, the incident was also a prime example of what psychologist Irvin Janis wrote about when he coined the term “Groupthink” in 1972, a tell-tale sign of dysfunctional teams that many a leadership text warns against. I first came across the term in required reading of a leadership course I undertook a few years ago. Kouzes and Posner’s The Leadership Challenge  espouses five practices of exemplary leadership, one of which is “Challenge the Process”, a practice to challenge the status quo; be comfortable with the risks and lessons in failure; and ultimately, eliminate a team dynamic that results in groupthink.

Further lessons from my reading into Bay of Pigs:

How would you counter the poor leadership and team dynamics of the Bay of Pigs alumni? Share your intelligence in the comments, or recommend some great holiday/work commute reading for the New Year.

Wishing you happiness and success in your endeavours in 2016, and in the words of Bob Marley, I hope you:

21 thoughts on “Postcard from Jamaica”